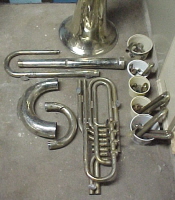 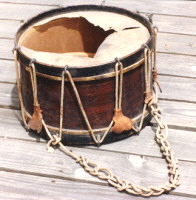 The vast majority of Heritage Military Music Foundation’s antique musical instrument collection are restored and maintained for playing purposes in the 1st Brigade Band, HMMF’s Civil War period band or the Brodhead Brass Band, an 1858 re-creation of the town band of Brodhead, Wisconsin. A few are maintained for display in the museum/library area and are occasionally used for traveling display at performance sites, conferences, or historic presentations. Most of the latter are drums, fifes, and later-period instruments. Even most of these could be played if necessary. They all have a fine appearance when displayed, but we feel that they are best experienced through their original purpose – to be used and heard by an audience. It is a great thrill to be able to restore and play an old instrument that has not had a voice in 100 years or more.

Some thoughts on instrument care and usage: We construct cases suitable for travel; original cases are not used except for display purposes. As a rule, most of these instruments did not have cases, and of those that did, most have gone by the wayside. Many were hand-made by the owners and are sometimes more interesting than purchased ones. Instruments are signed out to members who maintain them and keep the exteriors clean with a non-abrasive cleaner as needed. Instruments are repaired and regulated (strings, corks, pads) if needed and more thorough cleaning or repadding is done when necessary.

Instruments are restored to a condition necessary for playability with as little work or repair as possible. Parts are never replaced or modified unless absolutely necessary, and this is a rare occurrence. Parts missing from brass instruments, of course must usually be fabricated, as suitable replacements are not often found. Valve plating is occasionally done where the playability of an instrument cannot be improved in any other way. There are probably only half-a-dozen instruments in the collection where this has been done. As to the degree of restoration needed; it is very easy to overwork these softer, thinner instruments, so care is taken to ensure that at the very least, on heavily damaged areas, the horn is round and straight when finished – not necessarily worked or buffed to make it look like new. 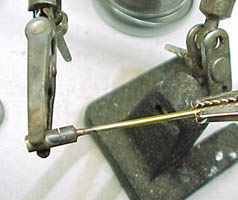 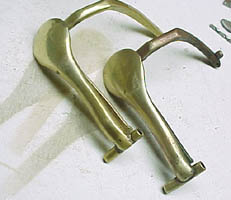 Some comments on 19th century brass instrument construction are in order here. Fabrication of tubing was done by rolling, brazing a seam, and then forming, bending or spinning. As such, seams are always a weak point in these instruments. Split seams are common in the smaller straight tubes, which have a smooth butt joint or slight overlap. Modern techniques of expanding a slide to make it fit better cannot be used, as the seam will come apart. Larger parts of the horn are usually made with a saw tooth seam which is stronger, but can still crack, especially when dents occur over them. Instruments at this time are made of a solid material, brass or nickel (German) silver; occasionally coin silver – not plated yet. Silver tends to be more brittle, and more prone to cracking in locations other than the seams, and often at sites where the instrument was worked, bent or damaged. Even valves and valve casings are made with seams. Some rotary valves are cast, and some are made as a seamed cylinder with inserted ports like modern piston valves or Berlin piston valves. The top and bottom bearings are machined onto the cast valves, but are soldered onto the assembled valves, and can come apart, as can the valve casing bearing. These instruments are all hand made and hand finished and fitted. The valve parts do not interchange, although sometimes the slides do. Workshops were often run with water or steam power if they were large manufacturers, and the equipment was usually belt-driven. Brazing was done with forge or fire. Below are some examples of brass construction seams. 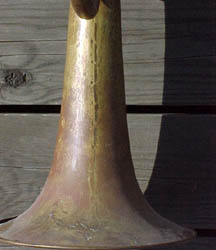 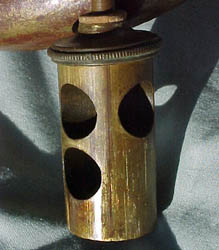 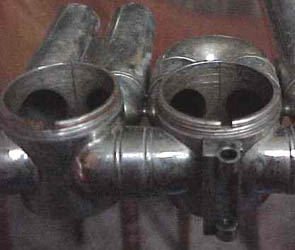 Woodwind instruments are still largely made of wood. Although metal flutes and saxophones exist, they are still rare and expensive at least in the United States. Boxwood, prone to cracking, is giving away to the more exotic and stable black woods; reinforced with metals at the tenons rather than with ivory or horn. Many flutes and piccolos still do have ivory heads, however. Keys are mounted in metal saddles drilled into the body of the wood rather than in wood saddles machined on the body of the instrument. Clarinet octave vents are metal tubes, and flutes have metal tuning slides; thus the natural material is prone to cracking since it will shrink over time. Keys can be broken or missing. Woodwind key systems overlap tremendously; simple system instruments such as 6 key piccolos, 8 key flutes and 13 key clarinets are most common, but all variations exist up to the modern Boehm types. Our playing instruments are of the simple system types. Consequently our woodwind players need to learn new fingerings, unlike the brass players who have the good fortune to be playing three-valved instruments that finger the same as modern ones, although we have found a couple of horns with 3rd valve slides that drop the pitch 2 steps instead of a step-and-a-half, as is normal.

Typical repairs usually consist of disassembly as necessary, thorough cleaning inside and out, dent removal, fixing of leaks, replacement of parts if necessary (woodwind pads always need replacing), and valve/key regulation. Often, most of the time is spent cleaning out an instrument that has never been cleaned before. Also, as there were few instrument repairers in the 19th century other than at instrument manufacturing facilities, (few would have been within walking or riding distance anyway) people relied on local artisans for repair; the blacksmith, cooper, tinker, or jeweler. Consequently, a wide variety of interesting repairs found on instruments of this period – from poor and ineffective to beautiful and professional.

The most common brass repairs we see are solder layered on with a soldering iron (sometimes ridiculous amounts), patches of all sorts of materials from brass to tin, string, thread and cloth electrical tape. 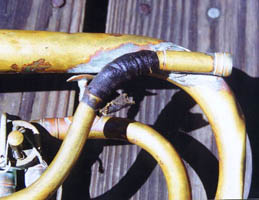 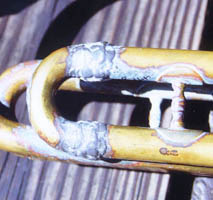 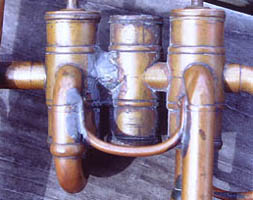 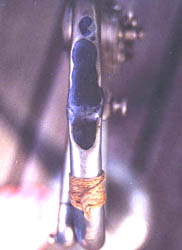 Drums are often repaired with fabricated and riveted iron plates or lots of nails. Woodwinds sometimes have pinning or flush banding, but more often have cracks that are sealed with sealing wax and wired with music or baling wire. Some of it actually works pretty well even if it is rather unsightly, and some of it did more harm than good and didn’t prevent leaking – if woodwind instruments lost keys, sometimes the owner simply plugged up the hole and did without that particular note. 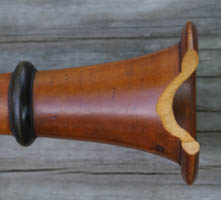 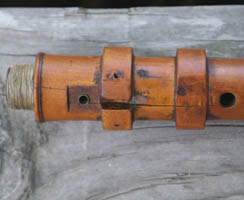 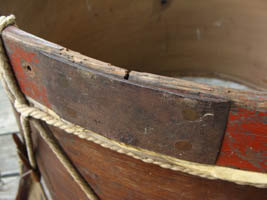 Frequently, the bulk of the repair time is undoing these improvised and unoriginal repairs and/or replacing inappropriate parts. Occasionally mismatched parts do work well. And, sometimes major parts are missing. So far, we haven’t had an instrument we couldn’t get back into some sort of playing condition, even if only to display. Some examples below. 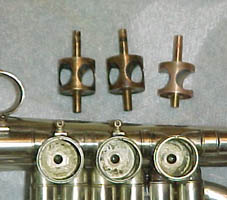 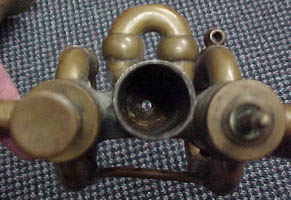 We have found that many instruments, as one might expect, were played in a band for 10 or 20 years, and then stored or handed down, and as such the playability is still good. The E flat brass band gave way to the B flat band with large woodwind sections and fewer brass. Pitch, which was very high for U. S. bands in the mid-nineteenth century began to become lower, and was finally standardized in the 20th century to A 440. Thus, some of these instruments became obsolete in certain ensembles. Others, though, have been “played to death” and been variously repaired and occasionally modified to play in many different ensembles by more than one generation of musician. These tend to be ones that require more attention and research to put them in original condition. We also have at least three brass instruments that have been modified from over-the-shoulder configuration to upright – two are professional or factory conversions and one is very poorly done. Over-the-shoulder instruments are ideal for military bands, but not as practical for a town band that might play in a dance hall or orchestra pit. Occasionally, we see an instrument that has really been abused, but not often. As an example, someone came up to one of our players who was playing an over-the-shoulder tenor horn on loan from a local historical society, and said that he remembered playing stickball with it when he was growing up. (ouch!) Don’t we wish that they could talk sometimes.

Fortunately, the restored instruments when handled carefully tend to be very sturdy and reliable. Ongoing repairs are usually routine; replacing pads, strings and corks. The rest of repairs usually entail old solder joints opening up, or parts becoming unsoldered; sometimes it is found that the joint was not properly soldered to begin with but has lasted 100+ years anyway. 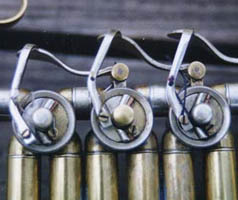 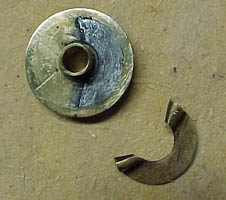 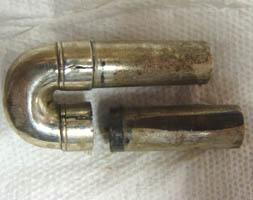 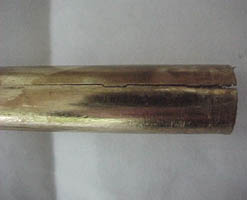 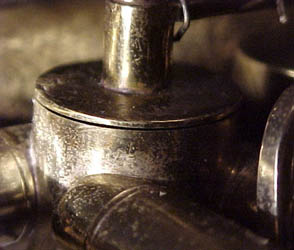 Artifacts other than instruments are treated depending on their condition. Most are preserved and displayed as found if their purpose is display and research and not direct use. These include images, music pouches, uniform decoration, flags, some fifes, drum sticks and slings, non-period Wisconsin historical instruments, music, military papers and books.

Below are a few examples of before and after restoration photos of some of the Heritage Military Music Foundation playing collection of antique musical instruments.