Two years after their triumph in Freeport, the Badger state found itself embroiled in the fight to save the Union.  An overwhelming tide of Wisconsin men responded to the call to arms, determined not to miss out on all the adventure and glory.  This included nearly all the members of the Brodhead Brass Band, who recalled with pride how they had played two years earlier for then senatorial candidate, now President Abraham Lincoln.  Members enlisted between May and July of 1861 and were formed as a regimental band assigned to the 3d Wisconsin Volunteer Infantry.  They were sent to Fond du Lac Wisconsin for a few days of training.  By this time their ranks had swollen to 26 bandsmen including Edwin Oscar Kimberly. In a letter to his mother, he wrote on July 12:

“I should have wrote you sooner but we have been waiting for our instruments and I thought I would not write until we got them, which came last night, these being 24 instruments, a splendid set, with bell over the shoulder [brass], with the exception of one Eb which is silver, a fine one, which the leader has given to me; we shall soon make fine music..”

The 19th century term for taking the train was “riding the cars.”  The 3d Wisconsin did just that a few days later, heading for Washington.  The word was that the army would soon move against the rebels and it seemed that the boys of the 3d would not miss out on the offensive that would surely end the war.  Upon their arrival they were astonished to find that they were to be diverted to Camp Pinckney in Maryland for further training and garrison duty and were not to be joining General McDowell’s forces moving on to Richmond.

Like most volunteers on both sides, these young lads were full of themselves; any one of ours could lick ten of theirs. Badger bravura had completely spread through the camps of the 3d Wisconsin with a boundless pride in their country, state, regiment and their commanding officer, Col. Charles Hamilton.

Hamilton was a rising star in the Badger state political firmament.  Ever popular with his men and cheered wherever he went, the man was loved and respected as few officers were and Edwin Oscar Kimberly was determined to do something about that.  He composed a song entitled “Hamilton’s Badger Boys”.  It was a tune filled with the politics, sentiment, and fervor of the times.  Lyrics include: “We’re Hamilton’s Badger Boys, and hither we’ve come from woody Wisconsin, our dearly loved home.  To fight for the Union – to conquer or die!  And to raise in the foe land our wild battle cry.”; with references to Governor Alexander Randall’s speech to the regiment at Camp Hamilton in Fond du Lac, Wisconsin:  “Our Governor equipped us and told us to go and flail out the Union’s most treacherous foe. To pound him right hard on God’s threshing floor – and not to return ’till rebellion was o’er.”  It was sung to rousing cheers by Kimberly and others for the colonel in their Maryland camp on July 22nd 1861, the day after Bull Run.  The music also makes mention of their “stern ranks of grey” – the first five Wisconsin regiments were uniformed in grey at the war’s start (soon remedied).  The music was not published until 1899 . 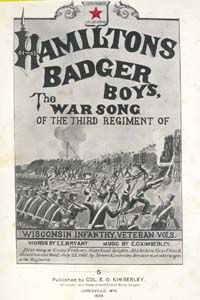 The “short 90 day war of glory” ceased to exist on July 21st with the Union defeat at Bull Run.  Both sides settled in for the coming fall and winter to regroup and build up for the next round of fighting that would surely come in the spring.  The 3d Wisconsin found itself under the overall command of General Nathaniel P. Banks.  The men of the 3d were to be part of a gathering army that would move against the Shenandoah Valley, breadbasket of the South.  While the nature of the war began to change, so did the musical volunteers from Brodhead.

By September of 1861 the band began to experience problems that were typical for units remaining in the field.  Leadership was a major problem for the musicians of the 3d Wisconsin.  The original leader proved incompetent and was relieved.  Kimberly, recognized for both his musical and leadership abilities, was appointed band leader.  The term “band leader” or “bandmaster” did not carry any rank in Civil War armies, however, as the local paper reported, it was still a considerable promotion.

“We are much gratified to learn that our former foreman, E. O. Kimberley, Esq., has been appointed leader of the Regimental Band, which secures him the pay of a 2d Lieut., $103, per month.”
(Brodhead Independent – September 11, 1861)

Bandmaster Kimberly was proud of his appointment, but quickly found that with the honor came the headaches!  Oscar’s war was proving to be of a very different nature than he bargained for.  His fight was NOT with the Confederate, army but rather with a never ending skirmish against constantly breaking instruments and thinning ranks. Disease, not minne’ balls, thinned the ranks of the musicians.  On some days entire sections of the band reported sick making, no doubt, what must have been appalling omissions in the music.  Little imagination is required to think of “Yankee Doodle” or “Hail Columbia” without the melody!  Their ordeal was tragically a common one.  Throughout the war the camps of both sides suffered tremendously from wretched camp conditions brought on by poor hygiene, bad food and primitive medicine.  Shoddy camp conditions and decaying health were symptomatic of field armies in the 1860’s and the band was clearly not alone in their suffering.  On the other hand a bandsman could be healthy and report for duty and still not make music from the disrepair of his instrument.  The horns that were issued by the state were quickly revealing themselves to be of exceedingly poor quality.  Even the old tin horns were better than these brass embarrassments.  The end result was the same: gaping holes in the music!

Just when it seemed things couldn’t possibly get worse, they did!  In early spring 1862 General Banks began his long awaited move against the Valley.  He not only faced a determined rebel army in the Shenandoah, but also without a doubt the greatest fighter the Confederacy possessed in the entire war, Stonewall Jackson.  This Valley campaign of 1862 would go down in history as one of the most brilliant of the war!  Banks was completely outclassed by his grey adversary.  Almost from the start he was clueless as to the real danger he and his army were really in.  Jackson out-marched, out-fought and out-generaled his blue opponent at every turn.  Orderly battlefield retirement quickly became a panic as thousands of men threw away their equipment in a desperate bid to save their lives.  The 3d Wisconsin Regimental Band was quickly engulfed in the route and more than half the men lost their horns.  Once safe in union territory, Oscar struggled mightily to restore the band but it was no use.  Regimental funds for the band had completely dried up and with it any hope for replacement instruments.  In desperation, Kimberly spent $50 out of his own pocket for new music but to no avail.  The officers of the 3d decided to have no further efforts at music and had the men wait for their enlistments to expire.  On July 22nd, exactly one year to the date after the premier of “Hamilton’s Badger Boys” the band of the 3d Wisconsin Infantry was officially discharged.